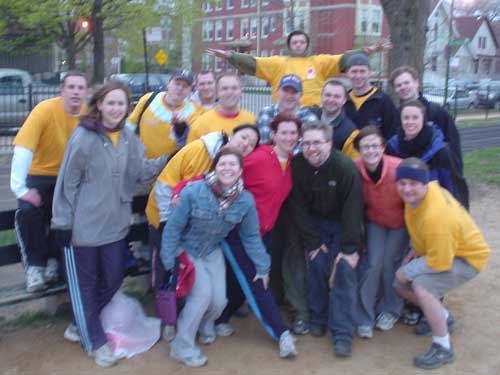 It's a little blurry, but I think you can see the victory in our eyes. Yes, kickball season has started again, and James Brown Celebrity Hottub Party is off to a great start with a win over Feets of Fury this week and one over the Kicktators last week. I think that's spelled 2-0.

I missed the game last week because of my book group, so I really felt I needed to go this week, even though I had missed half a day of work because I was sick. So I went to kickball and stood out in gale force winds for an hour and a half and, surprise!, I missed a whole day of work today because of my coughiness. Brainiac = me. (AND I'm kicking 000 for the season. Whee!)

And I don't know the whole story here, but Shaun and Tim asked Amber to customize their shirts and she showed up with these... 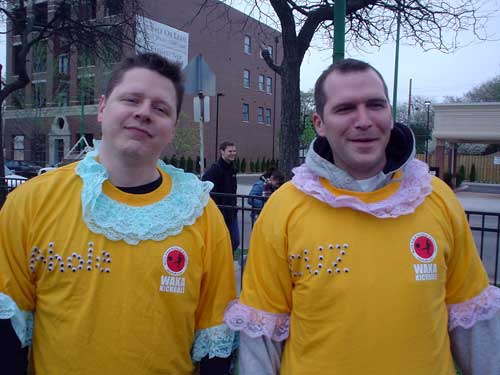 That's "Ahole" and "Cuz" spelled out in googly-eyes on the fronts of their shirts, which I guess are their nicknames, and, um... lace. Light blue and pink lace.

"I'd rip the lace off, but I think I know how much work went into attaching it to the shirt," Shaun said. And if that isn't the sweetest thing he's ever said, I'm not sure what it would be. (And if me posting that picture isn't the meanest thing I've ever done, it's probably in the top ten.)