Bare at the Phoenix Improv Festival 2011 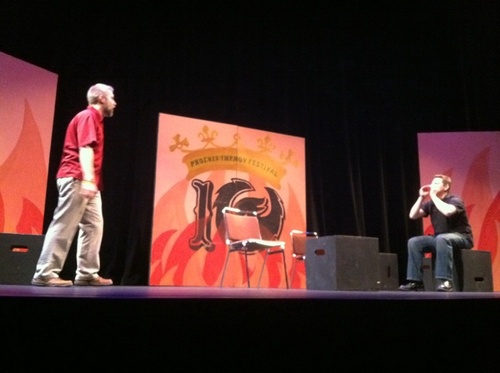 First off you should know that Chicago has two major airports: O'Hare and Midway. But there's an easy heuristic I keep in the back of my head: if I'm flying Southwest, that's Midway, pretty much anything else is O'Hare. But it's important to check your itinerary anyway. And I did! I booked a flight out to Phoenix for the tenth annual Phoenix Improv Festival and the cheapest/least painful wake-up times was a kinda crazy multi-leg set of Delta flights with different connecting cities on the way out and back (note that last part—it's a plot point). I looked at the itinerary and definitely saw the words "O'Hare".

So, Friday morning Erica kindly got up early and drove me out to O'Hare. She dropped me off at the Delta departure curb and headed off to work. I walked inside, pulled out my boarding pass (which I had printed out at home, but hadn't actually looked at) and noticed for the first time that I was supposed to be departing from Midway. (I would be returning to O'Hare, and that's what I had seen) I tried calling Erica, but she was being a safe driver and not answering her phone. So I went downstairs and got in a cab. Thanks to Erica's good planning, I was at O'Hare with plenty of time (had my flight actually been there) so there was just exactly enough time to get to Midway. Theoretically. If no one else was on the road.

But fortunately, my cab driver seemed to take my problem as a personal challenge. He was one of those aggressive cabbies that everyone else on the road hates (myself included) and drove about 80 mph the whole way down 294. At one point, he was following pretty closely behind a car that suddenly flashed its rear-window cop lights and the driver flipped us off. The cab driver slowed down until the state trooper pulled over the speeder in front of him and then we were right back up to 80. And when traffic on 55 looked a little heavy a few exits before the Midway exit, the cab driver exited rather suddenly and went barreling down city streets for the last few miles. In case you're wondering, with TriState tolls, it's a $61 cab ride from O'Hare to Midway (and of course, a grateful Fuzzy makes that an even $80). So, there goes any savings from my crazy flights.

But, the good news is that I arrived at the gate just moments before they started boarding. And at least on the Chicago–Atlanta leg I was in an exit row. Winning!

But the real winning was getting to visit our old friends in Phoenix. Back in 2003, Shaun and I applied to a small festival in Phoenix that was just in its second year, and only its first year of having non-Arizona groups perform. Logistically, the festival was a bit rough (Shaun and I being forgotten at the airport that year was part of the inspiration for PIF's excellent "den mother" system) but all the people we met were so wonderful that we kept coming back year after year. In nine years, we've only missed two years of the festival. We've seen the festival get better and better and the Phoenix improv community grow stronger and stronger. They're currently this close to opening a new collective improv theater, The Torch, so I can't wait to see that next year. And all the folks we've met over the years just continue to be the sweetest and loveliest group we've ever known.

Over the years of doing the festival, we've generally been in one of the later time slots. This year, just to mix it up, Shaun asked if we could go earlier. The reply came back, "Well, the earliest time slot would be during the 'Family Friendly' show on Saturday afternoon—would you want to do that?" Sure! Everyone I've told about our slot has had an incredulous look on their face, but c'mon, we don't have to swear all the fu… I mean, all the da… I mean, all the time.

Right before the show, I was nervous as all get out. We'd had a greasy sports bar lunch (okay, okay, it was Hooters) which wasn't helping settle my stomach at all. And, just between you and me, Shaun and I haven't performed together in a little while. But standing in the wings while The Jesterz were finishing up their show, Shaun and I did a silly warm-up exercise that we've been doing for years and it instantly calmed me down. That is, I suppose, why we do those silly warm-up things.

We decided to do our "Pageant of History" form, old for us, but which we don't think we've ever done in Phoenix before. We got a suggestion of Arizona's* own Doc Holliday, I read his Wikipedia entry's intro paragraph aloud (thanks to the Herberger for the free Wifi) and we were off.

An interesting experiment that the festival was trying, partly thanks to that free wireless, was embracing the distracted and disconnected nature of today's modern audience. So the host each night asked people to turn off their phones' ringers, but then invited the audience to tweet during the shows using the hashtag #pif10. You could scroll back through the tweets from a group's show and see what parts of the show had resonated with multiple audience members. So, at the bottom of this post, is the relevant Twitter stream from during Bare's performance (in normal chronological order, rather than Twitter's reverse-chrono).

Otherwise, the whole weekend was a delightful time of catching up with old friends, making new ones, and watching some pretty-good to great improv. Somewhat unusually for a festival, I didn't see a single bad show (that's not anything against anyone, it's just that festivals are always such an odd mix -- with enough groups, someone is bound to have an off night, being travel-tired and/or hungover doesn't help, etc. etc.).

* We should have realized that he lived in Arizona, given where we were. You'll see a tweet below that references that Shaun set the OK Corral in Kansas.

Bare is performing their improvised show The Pageant of History center around the audience-suggested Doc Holliday! #PIF10Sat Apr 16, 2011 5:55 pm via Echofon