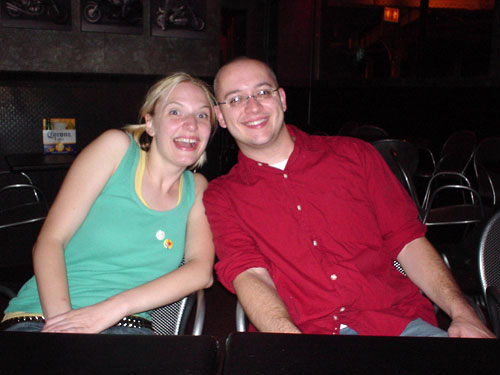 We had a very special guest at this weekend's Neutrino Project: Automated Workflows' Benjamin Waldie (AKA Erica's brother's brother-in-law -- hooray for extended family).

The show he got to see was, modesty aside, pretty darn good. Greg, who sees all the shows from the control booth, said it was the best one yet (of the run or ever? I forgot to ask).

I've been following my own advice for the last couple shows. That is, when the question of "what to wear?" had come up with previous casts, our answer has always been that, since the Neutrino Project restricts you to the reality of what kind of body you have and what you're actually wearing, that cast members should either dress neutrally, so that they can play a variety of characters, or make bold choices with costuming and then come prepared to back them up. Last week, I wore a cowboy hat and shirt but it didn't affect my character much beyond an accent.

This week, I wore my new $10 yard sale tuxedo (with a $40 tux shirt from H&M). On the way to the show, I was trying not to plan ahead, but I was thinking of the possibilites that a tux includes: on my way to or from a wedding? An awards show. And, I was going to be on a team with Bob Ladewig and Brian Goodman, so I'd be the odd-man-out in my fancy duds.

When I got to the show, I was reminded that Ben Taylor was out of town, so Bob was going to be taking over DJ duties. So it was going to be just Brian and me. And Shaun assigned our team the "location" of his motorcycle. And then, in the theater, our audience-supplied object was a Mayor of London business card holder stuffed with business cards from "Scott Wild". So, naturally, we became international action heroes Scott Wild and Hank Savage. Done and done.