When I finished Ironman Wisconsin last year, I was in the best shape I’d ever been in my life. Somehow, in the back of my mind, every event I did after that was going to be a piece of cake. Grandma’s Marathon this last week disabused me of that notion.

I’ve wanted to do Grandma’s Marathon for a while—it’s up in Duluth, Minnesota, where a bunch of my college friends moved after school. And among marathons, it’s got some great qualities: it’s very flat, it’s a point-to-point, so you never see the same scenery twice, and it’s right along Lake Superior along the Scenic Highway 61.

Now, it’s not like I didn’t train. I ran all through the winter, using the trusty Hal Higdon training schedules, and moved up to the “Intermediate” level. I skipped or altered a few runs here or there, but never the long weekend runs. My time was a little more constrained with work than last year, but it didn’t seem too hard to get the runs in and each longer run felt hard but achievable. Shaun was training for another Ironman, so our schedules got out of sync a bit, but we still managed to get a run or two a week in together.

So, on Thursday Erica and I drove up to Duluth. My friends Amy Jo and Colleen kindly hosted us for the weekend and really took excellent care of us. They’re both moms and athletes and so they were constantly making sure that I was getting properly hydrated, staying on nutrition plan, and getting rested.

Friday we did the expo, where I was given my packet by a real-live Minnesota grandma (who asked if I was “ready to rumble”) and we stocked up on expo-berkack. You know, some head bands and chia-goos and a flip-belt thing for Erica. And then we did our best to not explore downtown Duluth, which was difficult because Canal Park is super cute.

The start of the marathon is 25 miles north of Duluth in the small town of Two Harbors, so early Saturday morning Erica and Amy Jo dropped me off at a shuttle bus stop in downtown Duluth. I rode in the back of a school bus next to a bike cop from St. Paul named Jason who was doing his first full marathon and we chatted for the half-hour ride. On arriving in Two Harbors we were greeted by Pierre the jaunty, pantless voyageur and dumped out into a drizzling rain in a auto dealer lot. 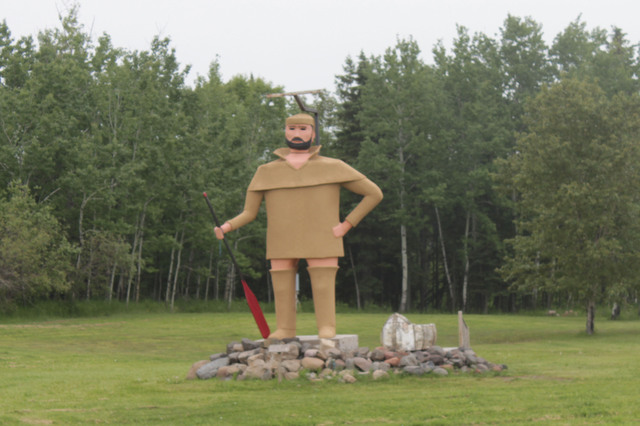 I stood around for a while and then stood in a porta-potty line and then had moments to throw my semi-disposable sweater into a gear bag and toss it into the gear-bag-truck and then get into line at the very end of 6000 people. The start, like the majority of the race, takes over an entire two lane highway, but with that many people, that’s still a pretty long line.

When the race started, I caught up fairly quickly with the 5:30 pace group. I was hoping on doing a 5:15 marathon, but I wondered if I should just fall in with the pace group. Just then, the pace leader said “let’s get a song going” and started a cadence. I didn’t know if I could deal with 5 hours of that and so I sped up a little.

For the next few hours I kept to a 11:30ish pace and just watched the scenery roll by. As much as I could. The weather stayed drizzly, 55°, and super foggy. Most of the route was wooded and occasionally we could see the shore and 100 feet or so of water before the wall of fog. 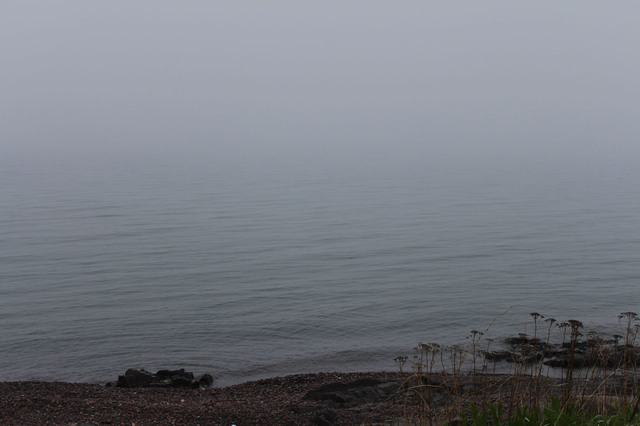 I took this the next day, but like this.

As much as I thought I had a pace I could keep for the whole race, after 15 miles I started slowing down a bit. At 18 miles I came out of a porta-potty break (I was sticking to my hydration plan, but the cool weather meant I wasn’t sweating that much and had to pee several times) and found that I had just been passed by the 5:30 pace group. I caught up with them and resolved to stick with them for the rest of the race. Fortunately, there was only one more song over the next 8 miles and I really do owe Sharon, the pace leader, for being a really good motivator. I probably should have just stuck with the group the whole way. 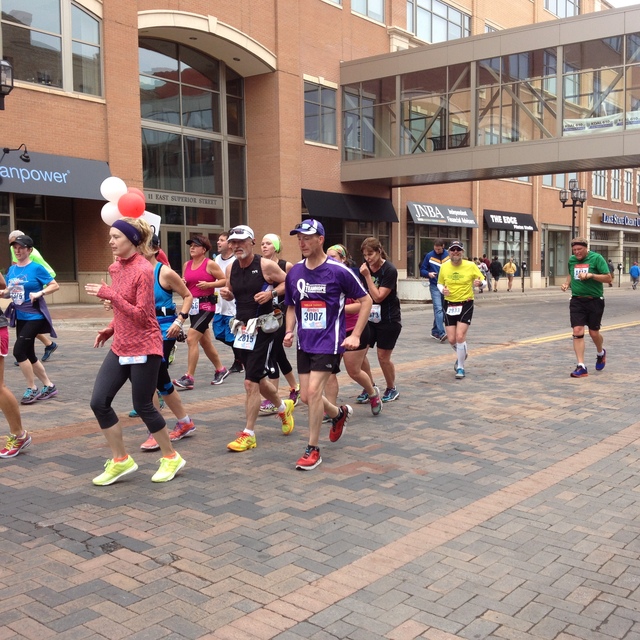 I got a brief lift at mile 20 as we entered Duluth and I saw Erica and the whole Swing-Kelly family cheering me on. 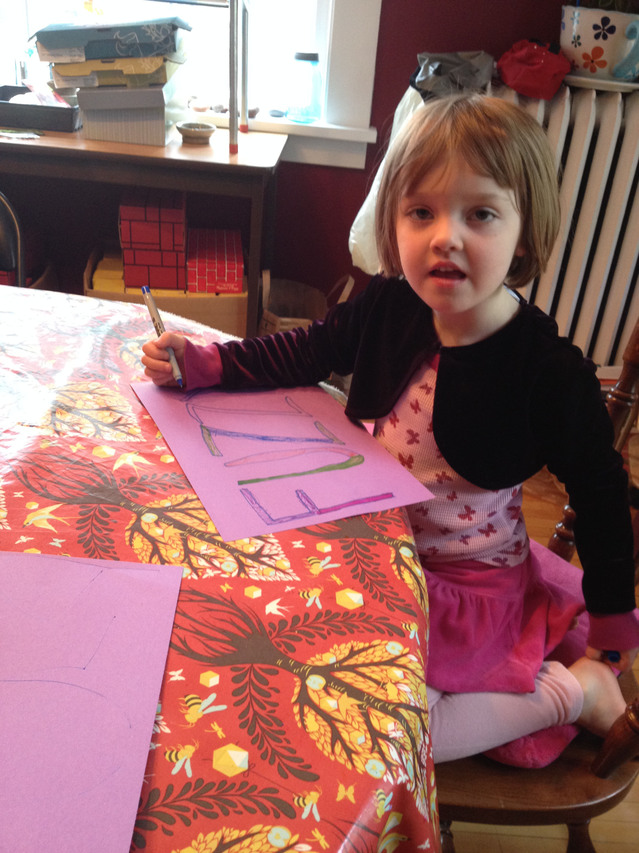 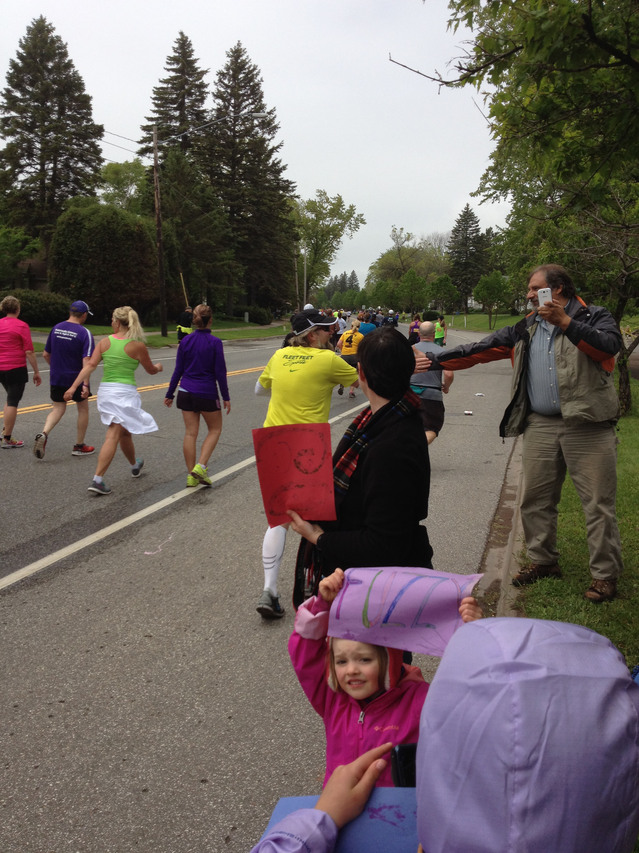 But then despite that and Sharon’s motivation, running was becoming more and more of an effort and I really hit a wall at 23 miles. I managed to grit through it, but as we approached the last mile I let the pace group get away from me and walked until I hit the last quarter mile and then ran it home. My final time ended up about six minutes slower than New Orleans. Not exactly what I was expecting.

So, marathons are hard.

I’ve got another one coming up this fall, after a few other big events, so we’ll see how much science I’m able to bring to my training.