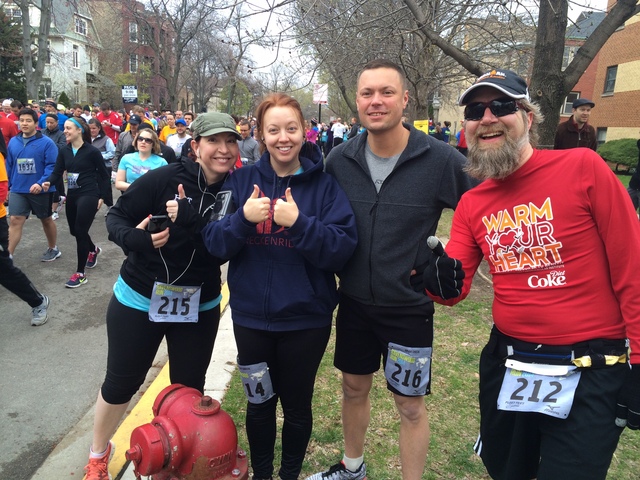 I realized that running has crept in to become not just part of our routine around here, but part of our social life as well. Our friends the Martins were in town for the weekend and one of their suggestions was that we all do the Ravenswood Run 5K on Sunday. (I mean, we also went to an Thrilling Adventure Hour taping and we took them to Snorf—we’re not suddenly all non-theatrical.)

It also wasn’t all fun and pancakes—Shaun is a few weeks out from his next Ironman and I’m hard into training for Grandma’s Marathon and so we both needed to do 17 or 18 miles this last weekend. There really wasn’t any other time to do it, so we both managed to get up at 5am and met up on the lakefront trail. We ran down past Wilson and took note of the time, looped down to Fullerton or so, and then back up to Wilson and over to the race in the Ravenswood neighborhood. We got there just a little early and knew that if we stopped it was going to be really hard to start up again, so we looped a few blocks. When we got back, we had done just about 13 miles and found Kristen and the Martins right away, just in time to start the race.

The course of the run was a little different this year and we went up Lincoln Ave and across Lawrence—making it feel a little more like the Lincoln Square 5K than the usual all-residential feel of the race—but it was a nice variety for someone who’s done the race several times before.

As we got within a half-mile of the finish, Shaun checked his Nike+ and announced that we were going to have to make a decision—finishing the race was just going to put us at 16 miles, a little short of both our training schedules. We decided to suck it up and right we finished, we made our way back through the crowd and ran back to find Trish and then ran back again to the finish line again, which took us just over 17 miles. Check!

So my 5K time is only just a hair over my usual pace, which is pretty good for coming at the end of a half-marathon. If I can watch my pacing, I might actually be able to run this whole marathon. 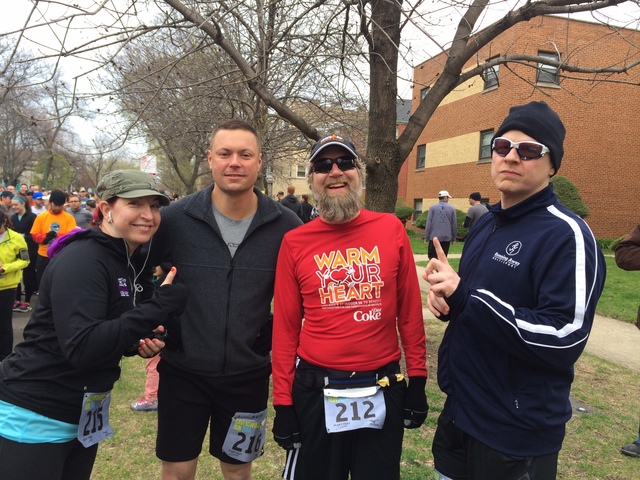