The Ravenswood Run is one of my favorite neighborhood runs—especially since I’ve spent enough time in Ravenswood/Lincoln Square that it feels like it is my neighborhood. I’ve run it enough times that doesn’t really feel like there any surprises waiting for me on the course, but it’s a comfortable start to the racing season.

This year it was good that there were no surprises because I was running with Shaun who was taking Stella out in a running stroller for her first organized race. I wasn’t even driving the thing and I felt like I had to keep an eye on it the whole time. Maybe that’s on me, but the race this year was mostly about Shaun trying to maneuver the stroller through the crowd at a reasonable pace without danger to Stella or anyone else. I don’t want to complain too much about a “neighborhood race”, which I guess should be closer to a fun run than a serious competition, but the race organizers didn’t enforce strict corrals (it was only 2500 runners) they provided some self-organization signage (“10:00/mile pace”, etc.) which everyone happily ignored. Or they’re unreasonably optimistic about their race speeds? If you don’t know, people, maybe stick to the back? Keep moving and get out of the way, as the saying goes.

As a side note, my race started today next to the house where Carl Sandburg wrote the poem “Chicago”, which was cool—I’m not sure I’ve ever noticed that before on that street. 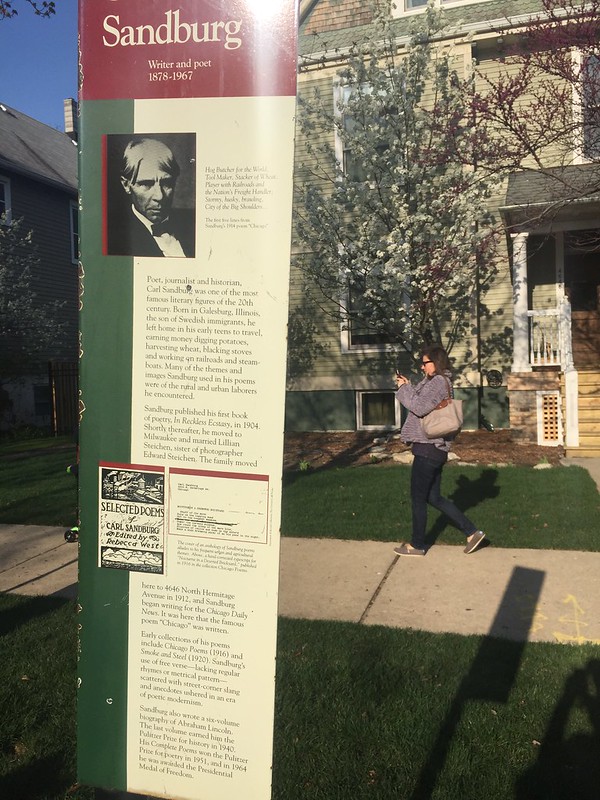 Fuzzy and Stella (and Shaun) Finish the Ravenswood Run 5K

I’m training, more or less, for the Soldier Field 10 next month and so needed to do 7 miles today, so as I finished the Ravenswood Run, I said farewell to Shaun and Stella and the Stroller and kept running east down Wilson. I hit the lakefront path and did a little two mile loop to end up back at Cricket Hill. That was the starting place for the Reverse Run.

I saw a poster for the Reverse Run just a few days ago and looked it up. A one mile backwards run to benefit a colon cancer foundation. It was cheap (just $10 with a tech shirt) and turned out to be pretty small—by bib numbers I’d estimate about 300 people ran. It was sponsored by Humana and they were documenting the heck out of the day—a full production crew with a bunch of fancy cameras were running around filming everything. I’ll bet it ends up in a promo video looking like a giant festival. Running backwards turns out to be tense, especially on a non-closed course (I’m really surprised no one got run over by a cyclist on the part of the course that was on the lakefront path itself) and a really good quad workout.