So if you’re a subscriber to Time Out Chicago, issue #425 showed up in your mailbox today and page one greeted you with that handsome bunch up there. This is the last print issue of the magazine, and most of the pictured staff have been laid-off, including myself. Friday was my last official day with the company, though I’m doing a little bit of contract work, helping the new reduced staff get transitioned into their new roles as primarily a web team instead of print journalists. But as Frank Sennett, our outgoing Editor-in-Chief, pointed out in his Afternoon Shift interview yesterday, it really is an amazing crew for a website and I don’t doubt that they’ll continue to be an important part of the Chicago cultural landscape. 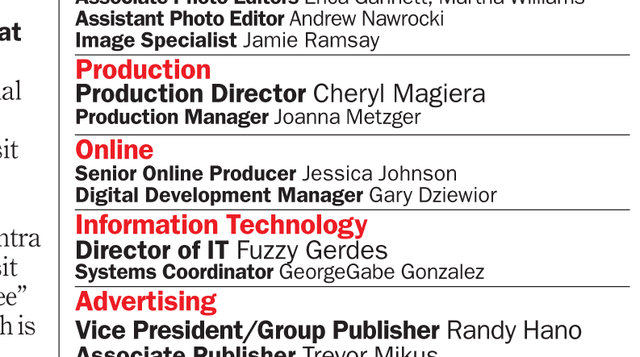 As for me, it was great being on the Masthead of TOC for the last seven months (especially right next to such a good friend), but I’m off to new adventures of my own in the Chicago cultural landscape. I had put the word out on Facebook and Twitter (and obliquely, here) that I was looking for a job and a lot of great friends pointed me at various IT jobs. I’m not ruling out a regular IT position, but TOC has made me very picky—I’ve been spoiled. Until that perfect job comes along, I’m going to try putting together various freelance gigs and see how that goes. Friends have been very generous in that regard as well, and I already have gigs lined up in a variety of my talents: IT, web work, video editing, photography. If someone would come along with a job as a ‘beardy guy’ I’d be just about set.