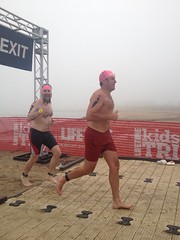 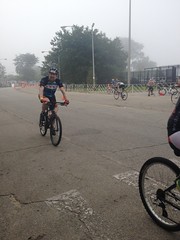 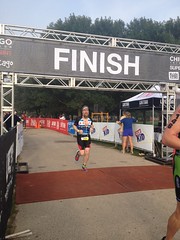 All photos from the SuperSprint by Erica

Today I completed the Chicago Triathlon Triple Challenge for the second time—doing all three distances of the Chicago Triathlon in two days. The first time was in 2012 and completing that, albeit with pretty bad knee pain, is what made me think I could do an Ironman. Do that was my training focus last year and since the Chicago Tri was two weeks before Ironman Wisconsin, I only did the SuperSprint as a sort of triathlon warmup. I didn’t want to risk injury or anything by doing the longer distances so close to my big event.

The Triple Challenge is a fairly niche thing. This year there were 150 entrants and only 104 finishers. When I was going to look at my results in 2012, I noticed that there was listed a second listing for the Triple that only had two names listed—the Triple Mountain Bike Challenge. The Triathlon in general has a number of specialty divisions that you can compete in instead of the usual age groups. There’s the Parathletes, First Responders, Clydesdale and Athena (athletes over certain weights), and there’s the Mountain Bike division, which requires tires over 1.75”. And there were only two finishers in the Triple-Mountain Bike in both 2012 and 2013. So, I figured, if I did the Triple Challenge in the Mountain Bike division, as long as that trend continued, no matter how badly I did I’d still place. I’d “podium”, as they say, which is not something I expect to do in pretty much any race. I’m an endurance athlete, not a fast athlete.

So this year I signed up for the Triple. There wasn’t anywhere on the form to sign up for the Mountain Bike division, but I emailed the registration info address and they said that they had moved me to that division. And I started training. Which is to say, I trained over the winter and the spring mostly for Grandma’s Marathon in June, with an occasional cross-training swim thrown in, and then I switched my focus to swimming to train for the Point to LaPointe at the start of this month. I put 1.9” tires on my mountain bike and… rode it to work a couple days a week. I don’t think I rode more than 10 miles in any one leg all summer. So I’ve been feeling a little undertrained.

And then they started announcing changes to the Chicago Tri. They changed the bike route—moving the turn-around north to Hollywood and taking out the second Lake Shore loop for the International distance and replacing it with new routes through Lower Wacker and the McCormick Bus Lane. That was interesting, but didn’t affect me too much (though actually it adds about a mile to the Sprint bike distance—I can’t actually find the exact distance listed*).

And they swapped the order of the distances—the Sprint had always gone first, followed by the International, and then the Pros last. That had never seemed to make sense—a couple of years ago a professional was taken out of the race by an accident with a very slow amateur still out on the course. So this year the Pros would go first, followed by the International and then the Sprint. That seemed to make sense for the Triple, but then when I saw the schedule I got worried. The Triple would be the first amateur athletes to depart at 6:15 for the International and then we’d be the last wave to leave at 10:15 for our Sprint. And the finish line is 1.5 miles from the swim start. My best time for the International was 3:51, so if I matched that, I’d only have 10 minutes to get back to the swim start and into goggles and swim cap, if not wet suit. If I showed up late, I doubt they’d let me start—they’d probably already be tearing down the equipment. I started worrying over the last couple weeks whether I’d be able to finish the Triple at all.

But there was some good news as well. The Triathlon organizers knew that they had made things more difficult for Triples and took some steps to alleviate them. Two race officials were “Triple Concierges” and one of the things they handled for us was “Swim Valet”—transporting a bag we left after our first swim leg to the swim start, so our swim gear would be waiting for us there and we could check our first run leg gear into gear check at that time. (That meant we had to have a second set of running gear, but that’s not a big deal.)

The swim was really rough—the water was the choppiest that I’ve ever seen Monroe Harbor. The Ohio Street Beach swim lane gets pretty choppy sometimes, especially down near the more open water, but Monroe is very sheltered. But I guess my Point to LaPointe training was good for something, because I finished the swim in about 35 minutes, which is much faster than I usually swim a mile. (My time on the official record says 41 minutes, but that’s because your “swim” time includes the run back to transition.) Oh, and at our course talk they were bragging that they did a cleanup of the swim route with a special sweeper boat to get rid of garbage. I don’t know if the heavy rain on Saturday interfered with that boat or if the rain brought it in, but there were huge mats of lakeweed all along the swim.

The first segment of the bike was great. I flew up Lake Shore Drive. And I always forget, when it really seems like I’m biking much faster than I expect, it’s invariably because of a tail wind. And indeed, when I turned around at Hollywood, I immediately ran smack into a headwind. But I was still making OK time and I was heartened because the Wacker section of the ride would be out of the wind. It was, though it also adds some interesting challenges to the ride. There are now a lot more u-turns to the route than before, and the first second of the Wacker segment is a long downhill, which you of course pay for with the climb back up. But it was neat to fly through the tunnels and nifty to get to ride on the usually private McCormick Bus Lane.

At the start of the run I felt great and the math told me that if I did easy 10-minute-miles I’d finish with 30 minutes to make it back to the swim start for the next race. The day did start heating up rapidly while I was running, but it was easy to knock out some 10-ish-minute-miles and I made it back with plenty of time. Well, with exactly enough time. I got my medal, grabbed a banana and a gatorade, and started walking. I managed to catch the shuttle trolley that takes you back to transition, but I’m not sure it was more helpful than just jogging over, because it over-shoots for this purpose, taking you all the way back to Monroe, when the swim start is at Harrison. But I made it back to gear check with 5 minute to spare, got into my wet suit, and joined my pink capped peers for the final wave of the day.

The second race was harder than the first, even though it’s only half the length and I was taking it pretty easy—going for the finish rather than time. The water was still very choppy and in my tired state it was pretty hard to stay on course. The bike had the same headwind issues and I was fighting calf cramps most of the way. And I walked about half the short run (it’s just a 5K!). But I finished! And was greeted by the Triple Concierges with gatorade and a special Triple finishers shirt. And I when I asked them if they knew how many mountain bike finishers there had been in the Triple, they said “oh, I didn’t know there was a Triple Mountain Bike division this year.”

On the results page of the 2014 Chicago Triathlon, there is only one Triple listed. And I finished 103 out of 104 finishers. But…

First in my Division. So, I did it! I’m a winner. Of what, I’m not sure. But a winner of winning, for sure.

* I realized that in my results they give me my avg bike mph and my time and that’s simple math to come up with the distance. I get 15.17 miles, which is borne out by my Strava record of the route. That’s up from 12.5 miles (20K), so that’s a little bit more than a miles, which is what they had been saying.