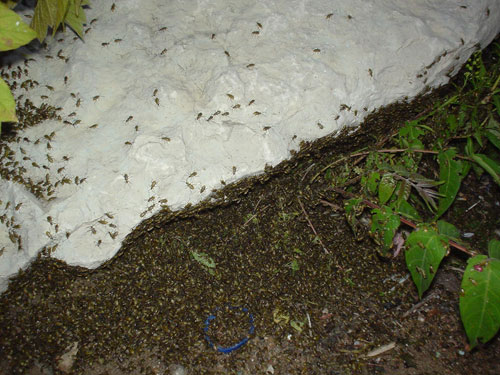 Last night (well, two nights ago, but it feels like last night -- stupid time change) Erica and I grabbed some grinders from Spirtinis and went down to the lake to eat dinner. We were going to go sit on the rocks at the north end of Hollywood Beach (where we filmed Candyland a few weeks ago). When we got there, we noticed a few bugs on the rock we were going to sit on. Then we realized that it was a lot of bugs on the rock. Then we realized that it was a sea of bugs around every rock. Bug Madness!

Spirtini's on Thorndale? I always walk by there on my way to the train and almost want to go in. How are those grinders there?

Deeelish. But I learned that if you get the Turkey grinder and ask them to put caesar dressing on it, you save yourself $.75 if you are jonesing for the Caesar Specialty Grinder. But I highly recommend it.

The grinders are pretty good. They do a cute thing where they brush the top of the bread with oil and then sprinkle parmesan on it before they send it through the oven, so the top of your sandwich has these crunchy toasty cheese on top.